It would be difficult not to look back at all the events of 2013 and wonder…..WOW how did all that happen?

Though the filming of “The Great Australian bake Off” was over a year ago now, 2013 truly was an amazing year, but it all started in 2012. No sooner did the new year begin when I received notification to be part of a taste test team for the “Australian Good Taste Magazine” in January, March and April. Not having ever entered any type of competition before June and July “Cook The Issue” was advertised, now I was cooking with gusto, writing up my take on recipes and taking photos of the food I had cooked. Posting photos on line and reading the amazing comments and meeting extraordinary home cooks along the way. I loved every minute of it. I was home cooking in my own kitchen over two months and 90 recipes later also equated to many cold dinners because unfortunately as I attempted to take the all important picture just before serving diner every time. I began a new facebook page and then my blog “Food from Home Blog” social media was all around me twitter was next.

The day of the cooking competition finals held in Sydney, I received a phone call. An invitation to my application to audition for “The Great Australian Bake Off”. I have to tell you all that I applied to be on the show as a favour to my dear cousin in law Patricia and now Im so glad I took her advice. After two auditions and a nervous wait filming began in November 2012. I feel like Ive entered the twilight zone Im going backwards just to go forwards….Hmmmm! After waiting almost seven months the show finally went to air in 2013, my phone went into meltdown as I didn’t tell any family or friends what I had been up to and the first commercial, which went to air on my birthday, caught everyone by surprise (and me) which I admit was fun listening and reading text of their reactions. With my nearest and dearest we all gathered at a local pub/restaurant to watch the first episode. The owners of the premisses had no idea why a large group of people were cheering and clapping while all gathered around watching a Baking Show! Now football they could understand, but this was cupcakes. Oh the confusion it must have caused. I even received messages that my home town in country South Australia was watching the show with fingers crossed.

As the weeks went by, I watched the person on TV, the other me! I felt the heartbreak and the joy all over again along with a few little anomalies which as time goes by you understand as “Some things make for good TV” little moments that Im sure never happened or did they? I was and always will be proud of every moment end every recipe I baked on the show. My three goals were met firstly 1: Don’t burn down he kitchen 2: Beat the clock and always have something lovely to present to the judges and 3: Get to the final three.  Getting into the final three was the pinnacle moment I could have walked away at that moment because I was happy. To everyone that wished I had won all I can say is thank you from the depth of my heart. I have always vowed not to over use this word but it has been a “JOURNEY” and I am grateful that I have had the opportunity to meet so many wonderful people.

During 2013 I have judged at competitions, given talks, and answered your wonderful questions. I have demonstrated some of my slightly unorthodox baking methods and drawn amazing crowds at the Royal Melbourne Show and Cake Expos. Meeting Julie Goodwin, Marion Grasby and Anna- Maria from Planet Cakes and filming with Paul Mercurio and listened to their very valuable advice, were a few of the highlights, but the best is still yet to come. I was asked to make cakes for special charity events like “Red Cake Day” and support kids with cancer “Camp Quality”. I have even managed to enter a cake decorating competition and my prize is a meet and greet with one of Melbourne’s best pastry chefs Pierrick Bower at “Le Petit Gateau”.  I am teaching my very own baking classes, and baking at the local Cafe and loving every minute of it. Im on a quest with the “Band of Bakers Australia” to rediscover recipes and uncover flavour sensations from amazing home bakers, bringing together the baking community in the city and the country. Promoting the benefits of home economics taught as a subject at schools not just an elective a valuable life lesson not to be underestimated. Im looking forward to 2014 and looking forward to catching up with you all again. Cheers and Happy New Year to all the Home Bakers, Cooks and household restaurants Chefs everywhere. 🙂

Signature Bake Challenge was all about  Gluten Free.

I have always lover the traditional Linzer tart its one of the worlds oldest recorded recipes. This inspired me to take something old and make it new, well the best way I know how.  Off course if you don’t like raspberry you can make strawberry jam or even plum it all works beautifully together. The pastry is lovely to work with and no rolling pin required.

Shane’s in love with raspberry jam!

We are all enjoying some of Monique’s left over figs…..delicious! 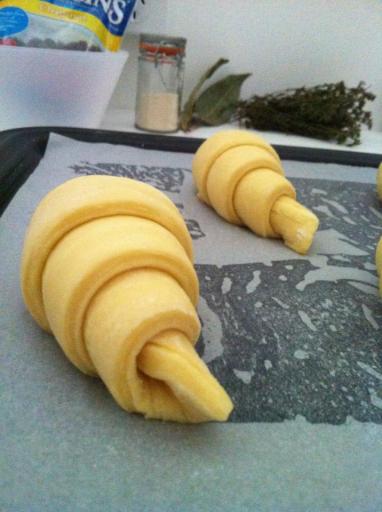 The dreaded technical bake was soon to follow, the French crescent moon the Croissants!  Even though it caught us by surprise it was the first time I felt a little at easy. This was the first technical bake that I had made at home and even though it was almost 10 years ago for the first time I felt a little confident…..as scary as that sounds.  My croissants didn’t fail me they were golden and flaky all puffed up Im sure I made this french pastry proud. Judgment time and they got “1st” YAY!

The ALL important “SHOWSTOPPER”

I had watched my grandmother and mother use the method of stretching the wet dough to make these supper fine sheets it take patience and a very large table. But in my wisdom I chose to make the Filo Pastry the traditional way using a very thin long rolling pin and a copious amount of cornflour which helps to stop the pastry from sticking together. Once this process has been completed each sheet is coated in golden melted butter to help the sheets cook and crisp through as well as add enough flavour to appease and French pallet. The real challenge with a strudel “no-mater” what the filling is the final presentation and I think a simple stencil and some sugared cinnamon was just the touch my strudel needed. 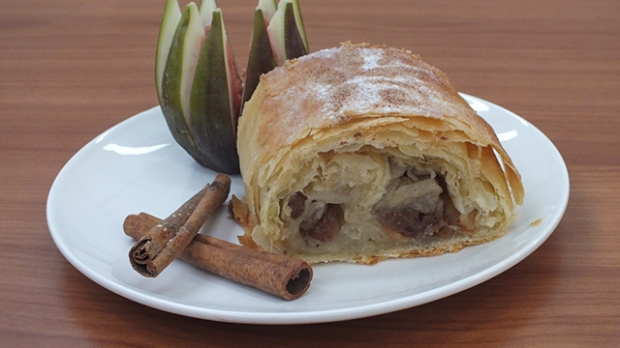 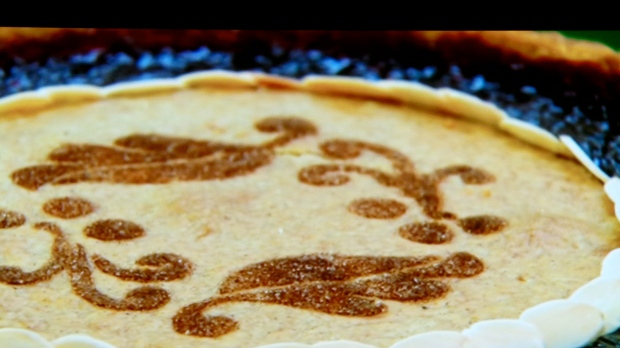 Place the almond meal, flour, baking powder, bicarbonate of soda, icing sugar, spices and butter into a food processor bowl and process until the mixture resembles breadcrumbs. Add the egg yolk through the feed tube and process until combined. Split the vanilla pod and scrape the seeds into the dough along with the lemon zest.

Place the dough onto a floured worktop and knead lightly until smooth. Cut off one-third and roll into a ball. Shape the remaining pastry into another ball. Wrap in cling wrap and chill for 20 minutes.

Roll out the larger pastry ball. Line the tin, then place it back in the fridge to rest the pastry. (A hint for rolling out this pastry, as it is quite crumbly: spray your worktop with oil. Place a large piece of cling wrap on top and roll the pastry out onto it. This will make it easier to pick up.) Roll out the smaller piece of pastry onto baking paper. Cut a small circle (18cm) to sit on top of the tart. Chill the base and top for 10 minutes.

Preheat the oven to 150°C. Wash the raspberries. Place the sugar in a deep pan and heat in the oven for 6 minutes. Place the raspberries in a separate heavy- based pan with the water and lemon juice. Mash the fruit and add the warmed sugar and Jamsetta, stirring constantly. Bring to the boil and cook, bubbling, for 5—10 minutes. Skim off any scum and discard. (To test if the jam is set, place 3 saucers in the freezer. Once cold, place 1 level teaspoon of jam on the first saucer. If set, the jam should wrinkle once cool; if not continue cooking for a further 3 minutes and test again on a fresh saucer.)

Preheat the oven to 180°C. Fill the chilled pastry case with the jam and cover with the decorated circle of pastry. Place almonds around the circle. Brush the pastry with egg wash and bake for 20—25 minutes. Decorate by sifting the cinnamon over the stencil before serving.

Thank you to judges Kerry Vincent and Dan Lepard

for there wonderful comments and off course being chosen as STAR BAKER. 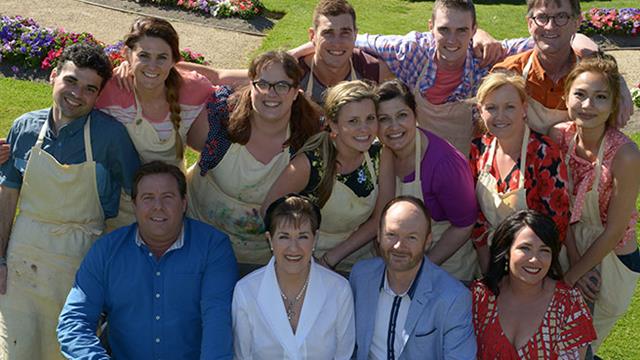 ” The Great Australian Bake Off”

I heard a little sound bite of myself and the theme music to the show in the background before the interview began one of those unreal moments! 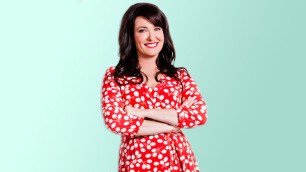 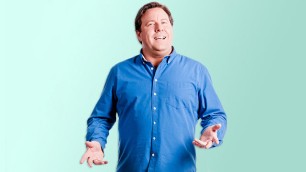 There will be regular updates and lots of pictures so stay tuned.

Time to meet the team of 10 bakers ready to take on the challenge!

I must admit that having the opportunity to be part of “The Great Australian Bake Off” has exceeded all my expectations! The cast and crew were sensational to work with. An enlightening experience to which I owe a debt of gratitude as it was their enthusiasm and great spirit that gave us the contestants the energy to keep going.  Thank you ALL; Lara, Cortney, Melinda, Ewan, Lee, Dana, Caroline, Rashid, Carmel, Carla, Sam, Merf, Chris and everyone else.

I remember the day we had these pictures taken …..big adrenalin rush day, same day as the commercial was being taped as well. An experience I will never forget.

"What I love about food, great flavours beautiful colours and recipes that work"